“It will not be independent and it will not be British and it will not deter”, ran the Labour slogan before the 1964 election. They might also have added “and we cannot afford it”.  For as long as Britain has been in the nuclear club, it has been haunted by this alternative nuclear story. By this reading, Britain’s nuclear weapons are the longest running white elephant project in the nation’s history; the “lace curtains” hiding Britain’s diminished status in the world and about as militarily useful as a “comfort blanket”. The trouble for consecutive British governments, many of whom have been emotionally quite attached to the elephant, is that this alternative story is quite plausible. Indeed, because nuclear weapons work by not being used (deterrence), there is no way to empirically debunk the suspicion that for all the “continuous at sea deterrence” Britain’s nukes are said to be doing, they may not have deterred anything at all.  Yet by the same token, anti-nuclearises can never prove that deterrence has not worked. Thus, Britain’s nuclear policy – as well as that of other states performing nuclear deterrence – can sustain indefinitely two logically consistent but contradictory narratives about what their nuclear weapons do and have done.

I explore the political consequences of this nuclear conundrum with my new book, Performing Nuclear Weapons: How Britain Made Trident Make Sense. Putting Britain’s competing nuclear histories into motion I undertake a close analysis of Britain’s nuclear stories from Margaret Thatcher’s fight to acquire the Trident nuclear weapon system in the 1980s, to Tony Blairs renewal of Britain’s nukes in the 2000s. Rather than take sides in the debate, arguing for or against the value of Britain’s weapons, the book explores a different question: how did consecutive governments maintain the idea that its nuclear weapons are a legitimate, desirable and a sensible way to spend scarce resources?  Or put differently, how have consecutive British governments succeeded in marginalizing the counter-narrative demanding nuclear disarmament? `

By answering these how questions and studying nuclear maintenance as a process, the book breaks with the conventional approach of asking why states go nuclear or not. While various answers to why states acquire nuclear weapons have been posited, these explanations typically ignore the ongoing processes of legitimation that keep the weapons in service: how these reasons are constructed, maintained, re-modelled, reified and sometimes discarded. Performing Nuclear Weapons does not dispute any one of these explanations per se but contends that governments have considerable power in producing the security, status, and domestic meanings that enable the maintenance of their nuclear weapons. Indeed, because nuclear weapons are represented to “work” by not being used, deterrence discourse grants a peculiar flexibility in representing nuclear weapons’ benefits. However, it also has a flip side. In the absence of proven “effects”, the positive meanings attached to nuclear weapons also require skillful storytelling to remain salient, avoid decay and thus enable maintenance.

Indeed, look closely, and it becomes clear that several of the axioms that underpin Britain’s nuclear rationale require considerable imagination and careful narration to become plausible, let alone accepted. For instance, Thatcher was fond of claiming that Britain’s “nuclear deterrent has not only kept the peace, but it will continue to preserve our independence.” Here, Thatcher was reiterating the junior British variant of the “nuclear peace” narrative: the common refrain that it was only nuclear deterrence that kept the Cold War from turning hot.  Yet, the only proof available to support this claim is absence and thus this story relies upon conjuring up a hypothetical Soviet invasion. Nevertheless, by the 2000s, Britain’s nuclear peace had solidified into common sense within British politics. Even anti-nuclearists sometimes reproduce it,  for instance, when they argue that nuclear weapons are no longer needed. Another key trope underpinning British governments nuclear maintenance is that they serve as an “insurance policy”. The metaphor works by harnessing every-day associations with prudence and eliding that activating nuclear insurance would not result in Britain receiving any compensation only undertaking war crimes.

Yet, instead of arguing that Britain’s nuclear peace is a myth or that the insurance metaphor is wrong, my book explores the function of these representations within Britain’s grand nuclear narratives and what evidence needs to be presented and alternative readings obscured in order to keep them in currency. Indeed, systematically forgetting that correlation is not causation is only one of several plot lines of the UK’s nuclear era, which my book contends have been necessary to keeping Britain’s nuclear boats afloat.

While I zoom in on the work Britain has had to put in to find and maintain a compelling nuclear story, my book suggests that we should conduct similar analyses of all nuclear-armed states.  Indeed, strip away security scholars’ conventional assumptions about nuclear weapons deterrence value, and a research agenda-defining international puzzle emerges. Only nine nuclear weapon-armed states exist, while 183 get by without nuclear weapons, and most seem quite content with their non-nuclear status. Moreover, at least 50 countries have the technical capability to build nuclear weapons yet only nine have chosen to do so. Rather than chomping at the bit to join the nuclear club, most non-nuclear weapons states have instead imposed stricter limitations on their ability to develop nuclear weapons. Indeed, going beyond the measures that are required by the Non-Proliferation Treaty, in July 2017, 122 states voluntarily adopted the Treaty on the Prohibition of Nuclear Weapons. Considering that non-nuclear security is the norm, instead of pondering why non-nuclear weapons states have not acquired the bomb (as security scholars prone to), it would make more sense to consider the few states that maintain such unpopular, yet expensive weapons to be the puzzle.

Systematically studying the stories states tell about their nuclear weapons would contribute to the growing transnational movement calling for a nuclear weapon free world (NWFW). Indeed, since the 1990s all the nuclear weapons states have ostensibly subscribed to the goal of a NWFW. Thus, each will necessarily need to perform its own rhetorical gymnastics to both justify their own weapons while simultaneously lamenting their existence. How states can keep on squaring this circle warrants sustained academic attention. Indeed, I hold that investigating each country’s specific nuclear stories – relentlessly poking and prodding at their assumptions and silences – would offer critical insights into each country’s relationship to its nuclear weapons and how their value is maintained within domestic politics. In turn, this could only help the international disarmament agenda unsettle the peculiar national nuclear narratives that enable nuclear weapons maintenance and inhibit disarmament. To be clear, this process will not reveal the anti-nuclearists to be necessarily correct. However, it should help reduce nuclear governments to their correct epistemological status: professional storytellers, opening up a space for alternative stories that might lead to a nuclear weapon free world. In other words, such studies might help nuclear states worry more, and learn to stop loving their bombs.

Beaumont’s new book Performing Nuclear Weapons: How Britain Made Trident Make Sense  is based on his Master’s thesis, Performing nuclear peace : how nuclear weapons have kept Britain great from Thatcher to Blair, completed at Noragric in 2015. Beaumont went on to complete a doctorate on international hierarchies at Noragric before joining NUPI as a Senior Research Fellow. 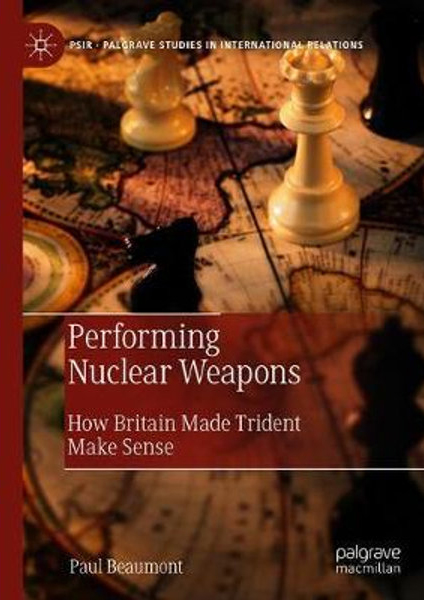 Previous Post: Who benefits from an imposed peace process on Afghanistan?
Next Post: Norway’s next industrial adventure is built on lithium